Blog/Thoughts
This page is for my thoughts/notes/updates/whatever the hell. So if you feel like reading through some rambles, opinions etc. of mine, feel free, I guess.


16.7.2022
Sorry I haven't been active here, been busy with other stuff (mostly AF and making a Kirby playlist with all Kirby music).
Gonna be doing some occasional clean-up here.
In other news, really excited for the new Kirby game! :D I have a screenshot from the trailer as my desktop BG-

14.6.2022
Can't even begin to explain how much I love the ability to have your own private corner of the internet where you can do whatever you please. Private websites are so fun. ( ´▽`)
I do kinda wish there was an option to turn off the ability to see how many followers your site has, because it is ultimately going to create a certain pressure, imo.
Regardless, love going through people's sites!
---

Still sad that ArtFight decided to cater to the anti-mentality. I really enjoyed AF, but anti-catering turns me off really bad. At least we still have Creative Clash. ;w;

4.6.2022
I just spent like 2 hours reading through translations of stuff in Forgotten Land, my brain is fried-

16.5.2022
Usually I only remember nightmares, but for once I actually had a nice dream I remember.
The start of it was shenangians in some random house It hink? There was a bunch of people and at some point we defeated a bunch of Poppy Playtime monsters???
The only characters I really remember from my dream are two guys, one of which was really tall and nice, like genuinely my dream self had a great time with him.
After the monster defeating we left the house. I went with the two guys and we just had a genuinely nice and chill time while we were driving somewhere in their van. The van had light coloured seats and it was night outside, even though I'm pretty sure it wasn't night when we left.

15.5.2022
Tumblr is probably the most active site to find new posts about Kirby stuff, but BY THE GODS am I every time reminded of how shit the culture on that site is and why I'm glad I left. Twitter gets a lot of shit for being a toxic site (it is, don't get me wrong), but I'd argue Tumblr is probably even worse, at least from my experience.
Anyway, I wanna make random theory posts or something. Maybe I should add a Theories section here or make a new page for that kinda stuff? Or maybe I'll just theory dump here-

14.5.2022
Been thinking about the site I'll make for my art. I'll probably make one for PG13 stuff and one or two 18+ one(s).
I've been struggling on coming up with a layout I like, but I think I'm starting to get a general idea of where to place stuff etc. Still not sure about the fancier stuff though.
Maybe I'll try to make it look like old-school DA. :3c

13.1.2022
Had two of my wisdomteeth pulled today. The process itself was not nearly as bad as I dreaded, but the minor bleeding afterwards is kinda annoying and triggers my anxiety. ;w;

7.1.2022
Staying off of social media and just developing my own websites has been really de-stressing. Bless Neocities. (´ ∀ ` *)
Fandom Related
This part is for my headcanons/theories/whatever about fandom related stuff.


12.8.2022
I watched the Kirby 30th Anniversary Music Fest yesterday, and AAAAAAAAAAAAAAAAAA it's so good! ;w;
Not only was the music good, they announced the release date for Dream Buffet and an HD version of the anime!!!
There was two things I was like 'Imagine if that happened' during the music fest and those were Dream Buffet release date and something about the anime... welp lmao.
I love the The Knights' Revenge Medley especially! I didn't know I needed a rendition like that of Meta's old battle theme, and the version of Galacta Knight's theme was one of the most epic I've heard (my favourite is still Azifly's orchestral version of it from the Return to Dreamland 10th anniversary video).
Dark Meta's battle theme is one of my favourite battle themes in the entire franchise, so I'm very happy it got included as well. ;w;
I also LOVE that they made Morpho's theme sound kinda distorted, it's such a cool touch!
The Northeast Frost Street rendition was so nice and chill~ ♡

I loved Kumazaki just POPPING OFF during the Dedede's themes medley lmao. What a man. Everyone else looked like they were about lose it.
(For those who don't know, Shinya Kumazaki, the current director of the Kirby series, voices Dedede in the games)
I also love how he was like 'Look at these cool people!' during the ending. 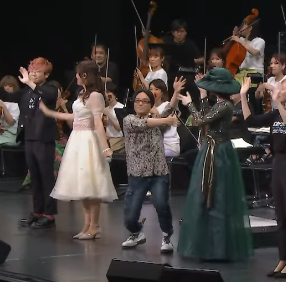 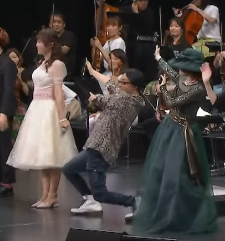 The Kirby series could not have gotten a better director.

Kirby's VA's outfit was really cute. ;w; Fitting, I guess.
Also, loved the Super Clash credits song and the Welcome To The New World performances! I was NOT expecting to see who's clearly the stand-in(?) for Neichel, the person than in-canon sang that song in the game. I wonder if they kept their face hidden on purpose...?

Anyway, if you haven't yet, go check out the stream for yourselves!

20.7.2022
I've made an interesting discovery. In Star Allies, Morpho Knight doesn't have arms, just floaty hands, but in Forgotten Land it has arms.


31.5.2022
I can't quite put my finger onto why, but I vehemently despise the idea of the ancients (or at least the technical faction) being humans.
I just really don't want humans to have been the big important thing in this franchise.
Maybe it all just stems for my displeasure of humanity in general, IDK.

In other news, I've recently finished Planet Robobot's main story, Meta Knightmare Returns as well as the Arena. The True Arena is definitely the hardest one I've tried, I got K.Od in round 4. :')

15.5.2022
A random theory I came up with while taking a shower yesterday, and definitely leans towards feeling like a conspiracy theory almost-
I have virtually no knowledge about what the Japanese version of the game says, so everything about this is based on the English localization.
Spoilers for KatFL!

So we have Fecto Forgo, Fecto Elfilis, Soul Forgo, Chaos Elfilis and the multiple bosses called Forgo [Insert character name here].
There's no Forgo Elfilis, just Elfilis and Forgo being combined with other words.
Fecto seems to most likely be derived either from 'infect' or 'perfect/complete'.

So, what if Forgo and Elfilis are separate beings?
There's quite a few people assuming Elfilis is one of the 4 Heroes of Yore that originally sealed away Void Termina due to their and Forgo Leon's + Phantom Clawroline's attacks resembling some of Void Termina's attacks as well as the sky, especially during the Chaos Elfilis fight, somewhat resembles Void. While I'm not personally completely on board with this theory due to a variety of reasons that're best spared for another post, for a moment let's assume they are.
If Elfilis really was one of the heroes that sealed away the Destroyer of Worlds, why would they then go and wreck house on some random planet? As the Lab Discovera elevator ride states: "From the moment ID-F86 arrived on our planet, it began a campaign of destruction that threatened the native wildlife of our entire world".
To add, why would it only go for the wildlife? There's nothing that states it was trying to harm the people on the planet (which can be safely assumed to have been the ancients). It's also worth noting that while more subtlely under Fecto Forgo's control, Leon is able to speak just fine, but when Fecto Forgo took full control of him, his speech became more primitive, in lack of better words.
If Elfilis and Forgo are two separate beings in the same body, could it be that Forgo is a parasite of some kind?
It would explain why a supposed hero would suddenly turn mad, why it mostly seems to be after wildlife, why it's speech capability seems to be on a lower level as well as conviniently explaining the possible 'infect' part of Fecto Elfilis etc.

I also have another explanation for Elfilis behaviour, still assuming they were one of the four heroes.
They could have gotten corrupted/possessed by Void/the Jamba heart in some way. Void is capable of possession and the Jamba heart has been proven to be capable of corrupting people.
Yeah, that's about all I've got for now.
It's late and I'll be adding more stuff here if/when I come up with/find out something.

Some brief Kirby theory rambles I posted on my Fanexus some time back.
Spoilers for KatFL and some others!

1. Currently thinking about how final bosses related to the ancients all seem to have wings and horns (Galacta Knight, Magolor Soul, Void Termina, Elfilis, with the one exception being Star Dream, which technically still at least had wings in phase 1).

2.And also about how the main colour palette for the phantom bosses in Forgotten Land is pretty similar to Aeon Hero Dark (Magenta, dark purple, green/cyan).
The green -> cyan is admittedly a stretch, but no one can stop me from making the connection.

3.Found out about this on Tumblr, and fact-checked it myself; Apparently Morpho Knight's sword turn into Galaxia briefly during the attacks where the sword glows..